In 30 minutes, learn how to unlock the secrets of your iPhone 6, iPhone 7, or iPhone SE! Whether you own an iPhone or are thinking about buying one, iPhone Basics In 30 Minutes will help you get the most out of the device and its powerful hardware, the iOS operating system, and the ever-expanding universe of iPhone apps. Written in plain English with a touch of humor and lots of screenshots, this guide covers basic features as well as hidden tricks and time-savers. Topics include: 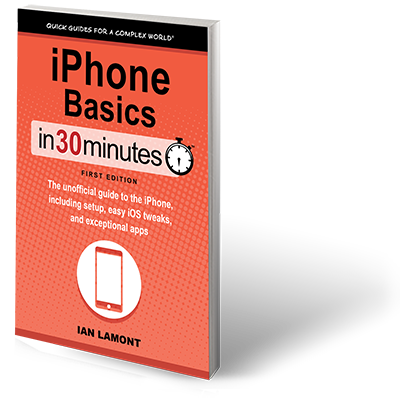 Each chapter contains lots of examples and screenshots that demonstrate how to get the most out of your new iPhone. Buy it today!

I would still be struggling to use the phone to it's full potential without this book.

Ian Lamont's 'In 30 Minutes' series demystifies and simplifies topics that leave non-techies scratching their heads for insight, if not plain old comprehension.

I have found these books to be very helpful as they deal with the important items that allow one to get up and running quickly with a minimum of side issue discussion.

For many people, getting a new iPhone is almost like buying a car. It’s not just because the devices are expensive and constantly used. Buyers get wrapped up in the whole experience. They obsessively compare specs, spend hours reading reviews, and even check out people unboxing the phones on YouTube. Then, it’s time to turn on the phone and customize it … and show off the shiny new toy to friends, coworkers, family members, and any other captive audience!

That’s certainly been the experience for me. And even if you don’t get excited about iPhone specs, the devices that make up Apple’s iPhone family are nevertheless impressive pieces of engineering and design.

Apple’s mobile operating system — iOS — is also well-designed, and comes with new features that extend the usefulness of the device. Imagine paying for something simply by holding up a phone to a credit card terminal, and pressing your finger against a fingerprint reader. It sounds like something out of a futuristic novel or TV show, yet it’s possible now for owners of any new iPhone model. There are many ways to use the new phones. Here are some sample profiles of iPhone users:

Renata is a mom by day and a restaurant hostess by night. She uses text messaging, Facebook, and Apple’s video conferencing technology called FaceTime to keep in touch with her friends and coordinate activities for her sons. While driving to work, she plays podcasts on her iPhone, which is connected to her car’s stereo speakers. Once she gets to the restaurant, she goes to her iPhone’s calendar app to arrange her work schedule, using a shared work calendar.

Harlan is a junior at the local community college, majoring in biology. He depends on his large-screen iPhone 7 Plus to keep in touch with classmates, using social media applications such as Snapchat and Instagram. Harlan also uses the Google Docs app to prepare homework assignments and collaborate on reports, and he can actually type using a portable Bluetooth keyboard that he pairs with his phone. Entertainment options include Apple Music and a slew of games, including his favorite time-waster, Plants vs. Zombies.

Corlis works in the finance department of a large retail chain. Her work-issued iPhone comes with the mobile versions of Microsoft Word, Microsoft Excel, and a financial calculator, all downloaded from the Apple App Store. Other apps on her phone include Slack, a group communications app, Wunderlist, a sophisticated to-do list, and Dropbox, a cloud storage app which allows her to access and share files saved to her desktop computer. When she’s on the road and needs to relax, she switches on an app that plays gentle background sounds such as falling rain and distant wind chimes.

Les is a retired postal clerk and grandfather. He likes to share photos with his family using the sharing features of the Photos app. He is especially fond of the snapshots taken by his 10-year-old granddaughter. For entertainment, he turns to the official NBA app to keep track of his favorite team, and also plays word jumble games against friends living in other states. When he’s having his afternoon coffee at the kitchen table, he will use his iPhone to watch streaming video through the Netflix app.

Tom owns a printing business in his hometown. The most crucial iPhone feature for him is Siri, Apple’s built-in “personal assistant” which allows him to use the phone without even looking at the screen. Siri can understand spoken commands to get directions to customers’ addresses, dial suppliers on his contact list, and even compose text messages.

While the latest phones are powerful and loaded with all kinds of capabilities, there is a learning curve. This is especially true for new iPhone owners who have never used a smartphone, or those who are used to models featuring Android or Windows mobile operating systems. Even if you are migrating from an older iPhone, be aware that newer iPhone models handle certain tasks differently.

The new iPhone models also offer a boatload of new (and obscure) features that need to be explored. While this guide is does not cover every feature, it is intended to smooth the learning curve and help you get the most out of your iPhone.

We only have 30 minutes, so let’s get started!